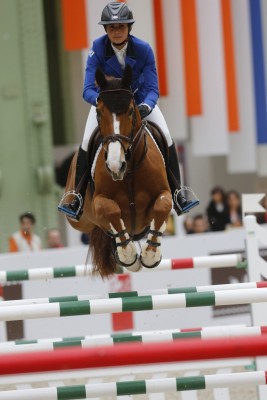 Since 2010, Hermès has established a space for horses in the heart of Paris, and created a top flight sporting event, bringing together the world’s fifty best riders to compete in the 5-star international show jumping trials (CSI 5*), the highest category classified by the Fédération Française d’Équitation (FFE) and the Fédération Équestre Internationale (FEI).

Hermès has entrusted the technical development of this year’s competition to the world-renowned Spanish course designer Santiago Varela Ullastres. He will work on the competition’s ten trials, assisted by the French course designer Grégory Bodo and the French rider Michel Robert, sporting advisor for the Saut Hermès at the Grand Palais.

In addition, throughout the duration of the event, twenty rising stars under the age of 25 will compete in the “Talents Hermès” trials supported by riders on the CSI5* circuit, in the spirit of skill sharing that is so dear to Hermès.

On 17th March, the sound of horses’ hooves will continue to resound under the glass roof of the Grand Palais after nightfall for an evening event during which the audience will be able to watch the “24 Faubourg” speed trial.

The Saut Hermès at the Grand Palais is also an opportunity to celebrate the horse, the “first customer” of the Parisian house. Every day, visitors will be invited to discover an all-new show created by Bartabas, and the National Equestrian Academy of Versailles. They will also enjoy fun equestrian entertainment in the galleries of the historic Parisian venue.