Home / Excursions outside of Paris / Versailles

When the château was built, Versailles was a country village; today, however, it is a wealthy suburb of Paris, some 20 kilometres southwest of the French capital. The court of Versailles was the centre of political power in France from 1682, when Louis XIV moved from Paris, until the royal family was forced to return to the capital in October 1789 after the beginning of the French Revolution. Versailles is therefore famous not only as a building, but as a symbol of the system of absolute monarchy of the Ancien Régime. 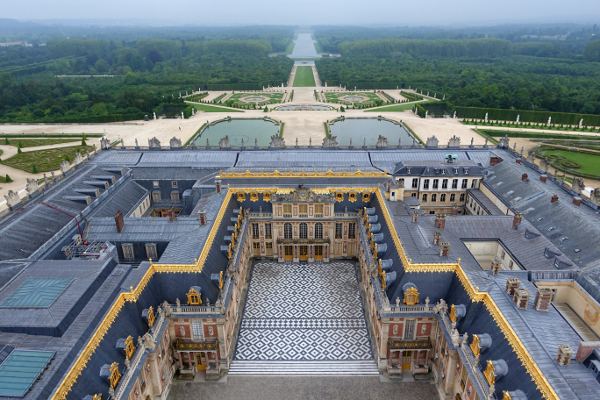 Begun by Louis XIII in 1623, the château began as a hunting lodge in brick and stone. It was expanded into a royal palace by Louis XIV. The first phase of the expansion (c. 1661–1678) was designed and supervised by the architect Louis Le Vau. It culminated in the addition of three new wings of stone (the enveloppe), which surrounded Louis XIII’s original building on the north, south, and west (the garden side). After Le Vau’s death in 1670, the work was taken over and completed by his assistant, François d’Orbay.[1] Charles Le Brun designed and supervised the elaborate interior decoration, and André Le Nôtre landscaped the extensive Gardens of Versailles. Le Brun and Le Nôtre collaborated on the numerous fountains, and Le Brun supervised the design and installation of countless statues.[2]

During the second phase of expansion (c. 1678–1715), two enormous wings north and south of the wings flanking the Royal Court (Cour Royale) of the main château were added by the architect Jules Hardouin-Mansart. He also replaced Le Vau’s large terrace on the west (garden) front with what became the most famous room of the palace, the Hall of Mirrors. Mansart also built the Petites and Grandes Écuries (stables) on the opposite (east) side of the Place d’Armes in front of the palace and the château known as the Grand Trianon (or Marble Trianon), replacing Le Vau’s 1668 Trianon de Porcelaine in the northern section of the palace park. Work was sufficiently advanced by 1682, that Louis XIV was able to proclaim Versailles his principal residence and the governmental center of France, and to give rooms in the palace to almost all of his courtiers. After the death of his consort Maria Theresa of Spain in 1683, Louis XIV undertook the enlargement and remodeling of the royal apartments in the oldest part of the palace, the château built by his father. The Royal Chapel of Versailles, located at the south end of the north wing, was begun by Mansart in 1688, and after his death in 1708, completed by his assistant Robert de Cotte in 1710.[3]
Marble Court[4]
In 1738 Louis XV remodeled the king’s petit appartement on the north side of the Cour de Marbre (Marble Court), originally the entrance court of the old château, and built a pavilion in the palace park, the Petit Trianon, designed by Ange-Jacques Gabriel and completed in 1768. At the north end of the north wing, Gabriel also built a theatre, the Opéra, completed in 1770, for the marriage of the Dauphin (the future Louis XVI) and Marie Antoinette. After he became king, they made only a few changes to the main palace, primarily to their private apartments.[5] However, Louis XVI gave Marie Antoinette the Petit Trianon, where she made extensive changes to the interior, as well as its gardens, including adding her private Théâtre de la Reine and the Hameau.[6]

Following the Revolution and the fall of the monarchy, Versailles fell into disrepair and most of the furniture was sold. Some restoration work was undertaken by Napoleon in 1810 and Louis XVIII in 1820, but the principal effort to restore and maintain Versailles was initiated by Louis-Philippe in 1833, when he changed the palace to a museum dedicated to French history. Among the rooms created during this period, one of the most famous is the Hall of Battles (Galerie des Batailles) on the main floor of the south wing.

The Gardens of Versailles (French: Jardins du château de Versailles; French pronunciation: ​[ʒaʁdɛ̃ dy ʃato də versaij]) occupy part of what was once the Domaine royal de Versailles, the royal demesne of the château of Versailles. Situated to the west of the palace, the gardens cover some 800 hectares of land, much of which is landscaped in the classic French Garden style perfected here by André Le Nôtre. Beyond the surrounding belt of woodland, the gardens are bordered by the urban areas of Versailles to the east and Le Chesnay to the north-east, by the National Arboretum de Chèvreloup to the north, the Versailles plain (a protected wildlife preserve) to the west, and by the Satory Forest to the south.

As part of le domaine national de Versailles et de Trianon, an autonomous public entity operating under the aegis of the French Ministry of Culture, the gardens are now one of the most visited public sites in France, receiving more than six million visitors a year.[2]

In addition to the meticulous manicured lawns, parterres of flowers, and sculptures are the fountains, which are located throughout the garden. Dating from the time of Louis XIV and still using much of the same network of hydraulics as was used during the Ancien Régime, the fountains contribute to making the gardens of Versailles unique. On weekends from late spring to early autumn, the administration of the museum sponsors the Grandes Eaux – spectacles during which all the fountains in the gardens are in full play.

In 1979, the gardens along with the château were inscribed on the UNESCO World Heritage List, one of thirty-one such designations in France.[3] 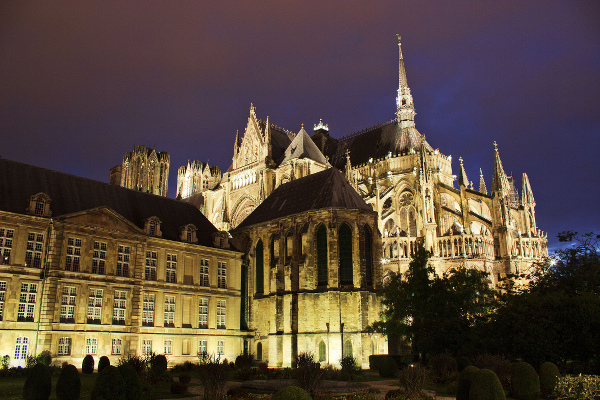